On view at The Contemporary Austin – Jones Center on Congress Avenue

This exhibition is curated by Louis Grachos, Ernest and Sarah Butler Executive Director and CEO of The Contemporary Austin, with Julia V. Hendrickson, Assistant Curator. Text is by Hendrickson. Garth Weiser: Paintings, 2008–2017 is accompanied by a 128-page full-color, hardbound exhibition catalogue, published by The Contemporary Austin, April 2017.

The Contemporary Austin presents the first monographic museum survey of the paintings of Garth Weiser (American, born 1979 in Helena, Montana, and based in New York). Spanning the last decade of the artist’s output and comprising twenty-two works on both floors of the museum’s downtown Jones Center galleries, this exhibition highlights key moments in Weiser’s recent oeuvre and illustrates an evolution in his exploration of abstract painting. Garth Weiser: Paintings, 2008–2017 is accompanied by a 128-page full-color, hardbound exhibition catalogue, which includes texts on the artist from exhibition curator Louis Grachos, Ernest and Sarah Butler Executive Director and CEO of The Contemporary Austin; Heather Pesanti, Senior Curator of The Contemporary Austin; and Charles Wylie, Curator of Photography and New Media at the Santa Barbara Museum of Art. In his catalogue essay, “Unknown Pleasures,” Grachos remarks on the unique experience of becoming immersed in Weiser’s paintings, noting, “In the end, Weiser’s paintings are fitting representations of the present moment: visually and conceptually dense, open-ended, and even contradictory, while ultimately gelling into some sort of off-kilter, unified whole—the sum of all noise reducing to a singular, magnificent drone.”

Raised in Tempe, Arizona, by parents who are both working ceramicists, in the early 2000s Weiser moved to New York to study art at Cooper Union (BFA 2003) and then Columbia University (MFA 2005). His early paintings are hard-edged and graphic—triangles, circles, and hexagons on flat picture planes hint at delineations of depth and space. These canvases recall the flat geometric abstraction of the midcentury Bauhaus artist László Moholy-Nagy, but with Weiser’s characteristically wry appropriation of the clunky visual culture and logos of twenty-first-century corporate capitalism. Later paintings become even more complex in their understanding of time and space.

Weiser’s paintings are indebted to the canon of midcentury Abstract Expressionists—not only Jackson Pollock but also Arshile Gorky, Philip Guston, Willem de Kooning, Lee Krasner, Joan Mitchell, Barnett Newman, and Clyfford Still—yet his persistent exploration of layering, conflating and confusing the relationship between foreground and background, locates the works in the present day. Characterized by an allover “interference pattern,” Weiser’s paintings are difficult to focus the eyes on, and even more challenging to photograph. Indeed, the power of Weiser’s paintings lies in their ability to resist reproduction, with the necessity of seeing them up close and in person. His work counters, both in process and documentation, the kind of quickly digested media that permeates contemporary culture. There is constant sublimation, as if changes in the physical state of the canvas continually occur when one tries to focus on the static image of the painting amidst its vibratory optical effect. The result is that Weiser’s work cannot be captured or understood in a digital social media moment, nor is it possible to instantly deduce how his paintings are made—by man or machine? As Pesanti notes, in the exhibition’s catalogue, of the present moment in contemporary painting: “Perhaps we are approaching painting’s era of Blade Runner (the film adaptation of Philip K. Dick’s novel Do Androids Dream of Electric Sheep?), in which the mechanical (or digital, in this case) can only be deduced through elaborate tests.”

In the artist’s early period, the late 2000s, one element of geometry appeared with increasing regularity: the thin, repetitive line. The painting titled I wouldn’t have worn mascara if I knew I was going to be taking a trip down memory lane, 2008, from the collection of the Dallas Museum of Art, bookends The Contemporary Austin exhibition as the earliest work on view, and is the key to a significant transformation in the artist’s work. Here the steadfastly geometric presence of a dark hexagon is activated by the optical stutter of cerulean blue stripes radiating from the painting’s center in sharply delineated segments. Unexpectedly, up close the geometric edges are not crisp: furry tendrils of color sneak outside of their lines like iron filings seeking a magnetic pole.

The paintings that follow chronologically explore the optical sensation of vibratory, close-knit patterns set against rich color contrasts between the treatments of fore- and background. Vivid works like Tahitian Moon and Played at Low Volume, both 2011, chart Weiser’s intensely focused analysis of a visual space within painting that exists on two planes: one that resides closest to the painting’s support (the under-painting), and one that sits nearest to the viewer (the over-painting). The effects achieved are reminiscent of the works of a generation of Op artists who rose to prominence in the 1960s and 1970s, such as John Armleder, John McHale, Bridget Riley, Julian Stanczak, Victor Vasarely, and Jack Whitten. However, in Op Art it is the flatness of the tightly patterned surface that supplies the dizzying illusion, while for Weiser, the layered dimensionality of his surfaces results less in a direct optical illusion and more in a tension or vibration, with similarly arresting effect. This act of layering—quite physical in its presence—is produced by the artist’s application of slender intersecting lines of oil paint that form a scrim on the paintings’ surface. Oftentimes the under-painting is highlighted by the artist’s incisions into the over-painting, a surface removal process much like the technique of sgraffito in ceramics. The multiplicitous nature of Weiser’s paintings is also present in his use of different kinds of paint: oil abuts enamel, on top of matte medium, three-dimensional fabric paint, acrylic, and tempera. The visual result is akin to the slick of oil on water or the wavering effects of a striped shirt viewed on a television screen—the overlaid patterns generating a disorienting moiré. The artist’s most recent works reveal yet another chapter in Weiser’s aesthetic evolution, and a continuation of his unrelenting exploration of the medium of painting. A dramatic increase in scale has the effect, in person, of capturing the eye in a roiling sea of unrelenting, irregular pattern. Expanding upon Weiser’s earlier works, the gestural under-painting gains more prominence over the grid in paintings such as 8 and 17, both 2015. There are moments in these works that reveal the graphic influence of the artist’s interest in comics and the psychedelic culture of the 1970s rock scene. As asymmetrical clusters of expressive lines swing crisply into view, the shuddering interference pattern on the surface becomes aural in its presence, a twist on the anthropomorphic sound waves in Walt Disney’s animated Fantasia, 1940. It seems almost possible to strum these paintings, in which a resonant sound could reverberate just below the surface—recalling the deep, dark volume beneath the strings of an acoustic guitar. In orchestral synchronicity, Weiser’s patterned stripes provide the bass line, a firm and structural rhythm in counterpoint to the leading melody of the fluid under-paintings. PRESS

Meares, Joel. “Abstractionist Garth Weiser chats with Time Out about his latest exhibit at The Contemporary Austin.” TimeOut Austin. May 30, 2017. INSTALLATION VIEWS 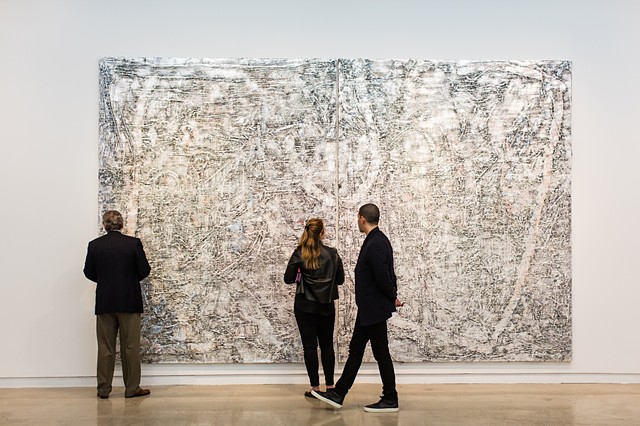 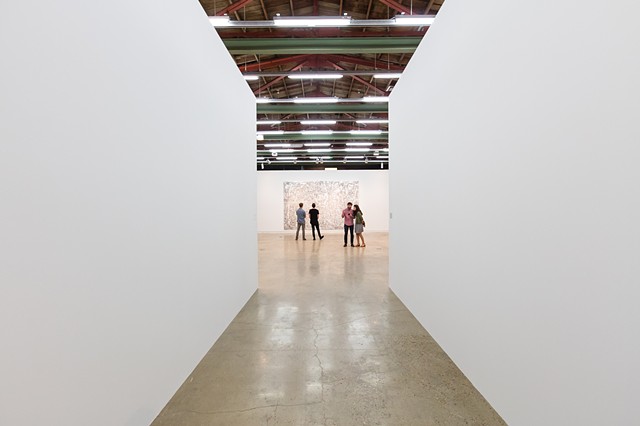 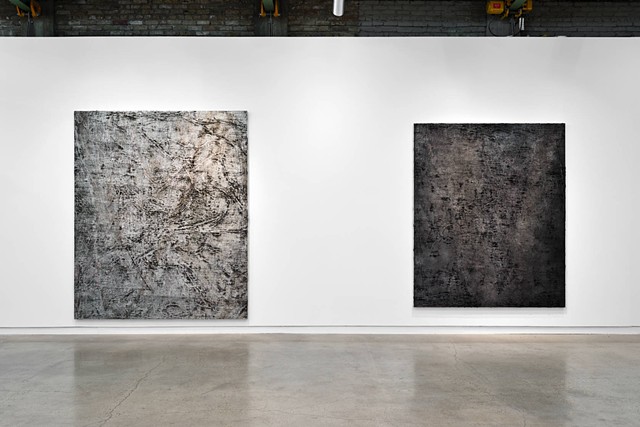 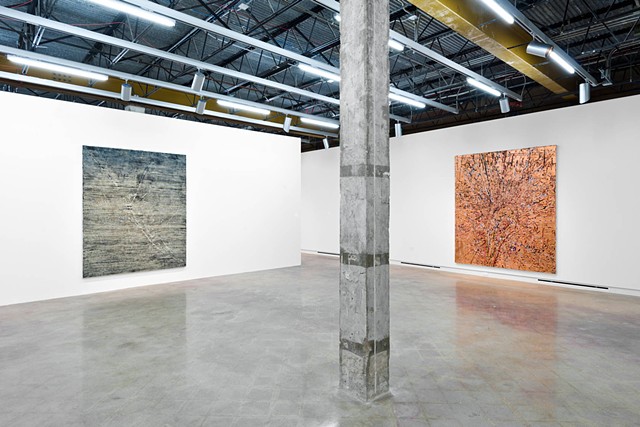 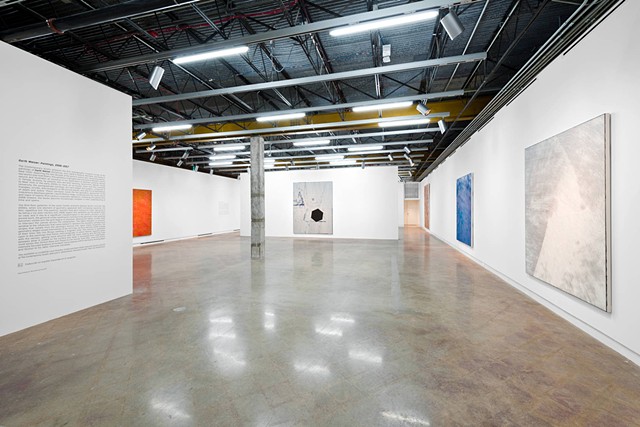 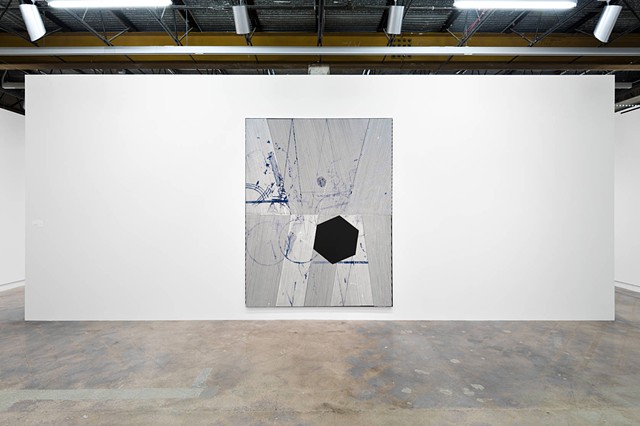 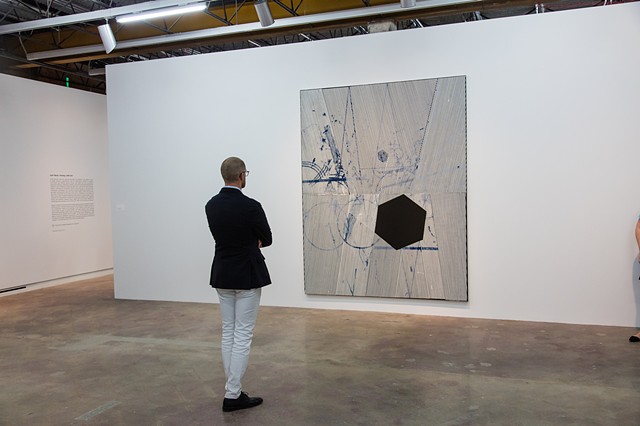 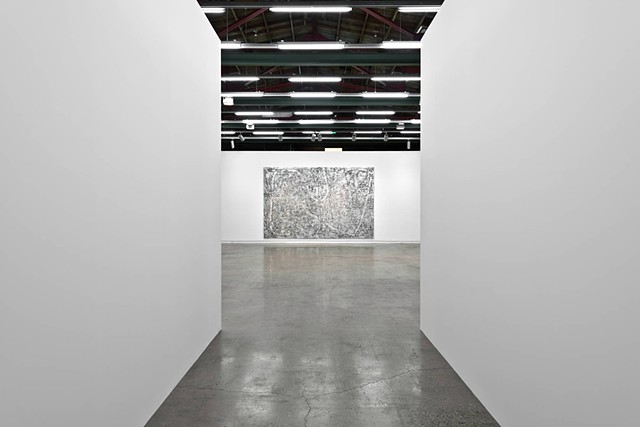